Welcome to HBGames, a leading amateur game development forum and Discord server. All are welcome, and amongst our ranks you will find experts in their field from all aspects of video game design and development.
Log in Register
You are using an out of date browser. It may not display this or other websites correctly.
You should upgrade or use an alternative browser.

9,896
I just went on a spree through the Steam store because all the RPG Maker resource packs are on sale... I think I own most of them now.

Anyone like any of them in particular? Have a favourite?

I like Time Fantasy, but I love a lot of the others that won't really match the tiles... I'm sure I'll find a use for them.

4,013
Oh cool, Vexed Enigma made POP!: Horror City. Looks pretty good but I'd never use it. It's nice to see familiar old user names. She definitely knows what she's doing.

I'm kind of against themed tilesets because they're not really designed as "sets", as in a stage set. You get a collection of material that fits a theme like sci-fi or steampunk but they don't have any practical applications for game locations.
Part of it is rpg maker's dumb tile sheet format that lumps tiles all together for people to mix and match like legos. XP was a little smarter by using separate sheets, But even with something as broad as "interior" People would try using every tile possible because it was there. So every home had a piano, bookshelf, suit of armor, wine bottles, staircase, -- not saving them for libraries and pubs or distinguishing wealthy from the poor.
So by extension, artists end up making props and not locations.

In the case of sci-fi sets, they can be a bit abstract. Is this pattern a floor, wall, or ceiling tile? Sure, holographic screens and plasma globes look sci-fi. But what's distinguishing a spaceship, from a laboratory, from a hospital? Consider a Galactic Senate or Federation; a lot of sci-fi stories involve politics so it would be smart to accommodate that. How should a civilian space station look compared to a military one?
It's a lot of work. A lot of thought should be put into set design and plausible game applications. When I try making tilesets I just end up with a very long to-do-list. And I rage when I see these hodgepodge maps that look like the artist didn't even know what to do with the tiles.

9,896
True. Some (like Fantastic Buildings) are even set up not to be modular - they look, well, fantastic, but they're huge chunks to be used in parallax mapping. 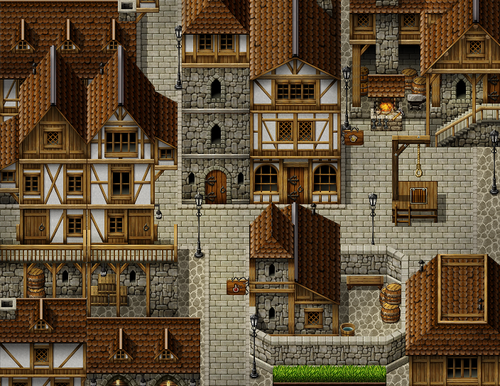 Thank you for viewing

HBGames is a leading amateur video game development forum and Discord server open to all ability levels. Feel free to have a nosey around!

Join our growing and active Discord server to discuss all aspects of game making in a relaxed environment. Join Us